Mystery of the Missing Classic 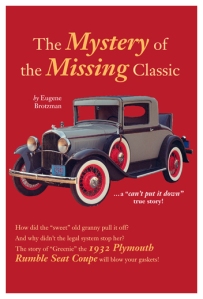 PRAIRIE DU SAC, Wis. — Thirty-two years after a classic car he had purchased disappeared under mysterious circumstances, a Wisconsin car collector, Eugene Brotzman, has published The Mystery of the Missing Classic. This new book recounts Brotzman’s four-year search for the treasured automobile.

Brotzman, a retired school principal, tells the true story of a 1932 Plymouth PA Rumble Seat Coupe (“Greenie”) that belonged to his nephew Greg Nelson for a time. When Greg returned from Vietnam, he and his wife rented a modest home in Eau Claire, Wis., storing “Greenie” in the garage. It was there that “Greenie” was illegally appropriated by the property owner, Olga Jensen Norbey, in March of 1974. Although Brotzman purchased the title to the 1932 Plymouth from his nephew, the car disappeared from Mrs. Norbey’s garage, setting off a mystery that was not solved until October, 1978.

The Mystery of the Missing Classic tells Brotzman’s story, which involved a trail of deceptions, delays and disappointments. While it is no spoiler to say that Brotzman owns the 1932 Plymouth today and has restored it to its former beauty—a quick perusal of the book’s back cover reveals this fact—the twists and turns Brotzman encountered along the way make his story remarkable.

The book also includes historical background on the Plymouth PA, a breakthrough automobile for its time that featured an engine mount system called “Floating Power.” Chrysler advertising at the time claimed that the Plymouth PA offered “the smoothness of an eight and the economy of a four.” The hand-sculptured “Flying Lady” radiator cap, featuring a winged mermaid, was another famed feature of the 1931-1932 Plymouth PA series. The PA’s many style and engineering innovations have earned it a unique place in automotive history.

Brotzman’s restoration, completed with the help of Ken Stadele of Ken’s Klassics, Muscoda, Wis., reversed the effects of an earlier “restoration” that had destroyed many of the car’s original features. The search for parts and information

took Brotzman and Stadele to sources in 14 states. Today, Brotzman’s Plymouth PA Rumble Seat Coupe —one of 9,696 manufactured in the 1932 model year—is used for public appearances at weddings, parades and other public events.

The Mystery of the Missing Classic may be ordered from the author or from Amazon.com for a price of $14.95 plus tax (Wisconsin residents only) and shipping/handling. Contact Eugene Brotzman at 608-643-0717 or brotzman1035@verizon.net.

One response to “Mystery of the Missing Classic”